Episode 63: About conversation in America, with Jim St. Germain 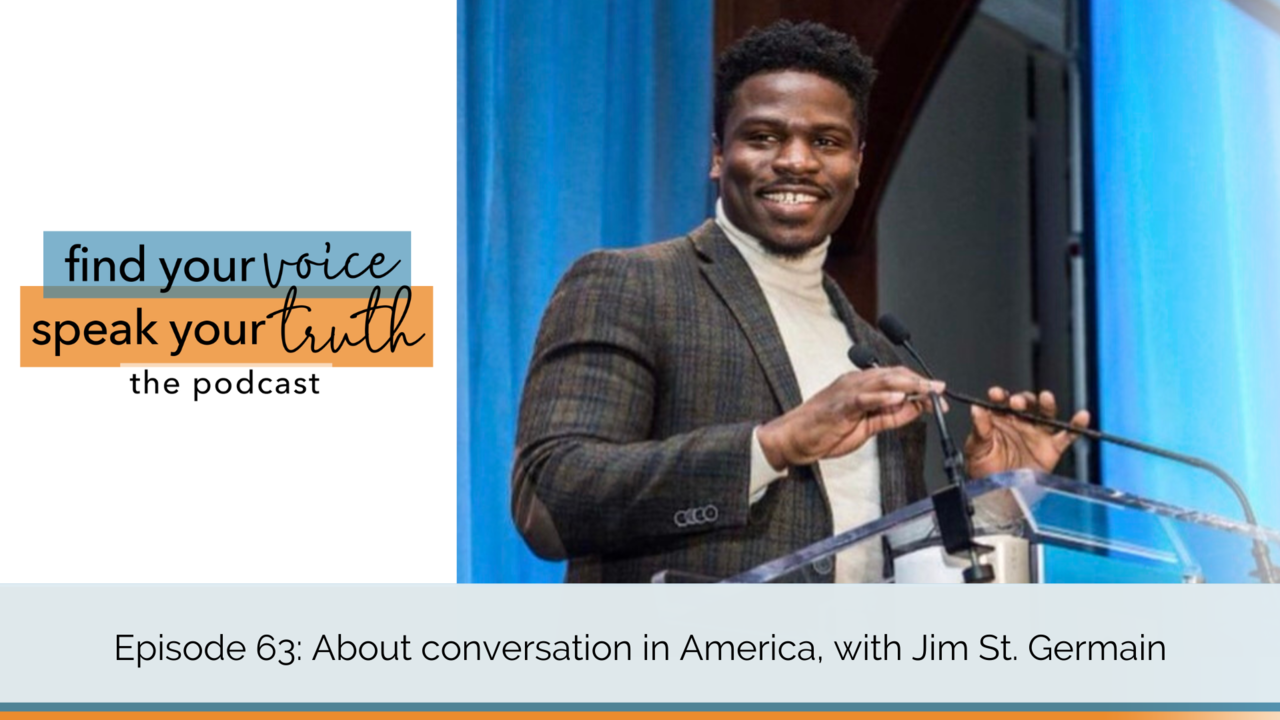 I met Jim St. Germain on a bus in Tulsa, Oklahoma. Immediately I realized I had a lot to learn from his inspiring story and his knowledge of American history. And this episode is a history lesson, indeed. I relish the way Jim challenges me and calls my thinking to task in this conversation.

So often we choose to talk to people with whom we can simply go back and forth in a “bubble of agreement.” This episode is not that. It’s a real conversation about the real America. We talk about race and class and America’s true history. We expound about Amy Cooper and Harvey Weinstein. We interrupt each other and our nervous systems get charged. Real conversation is messy my friends, but that’s no reason not to dive in. Join us.

The Find Your Voice, Speak Your Truth podcast · 63. About conversation in America, with Jim St. Germain

Want to learn the Voice Body Connection Process so you can practice raising your voice and speaking your truth? Take the free mini-course HERE.

To learn more about Jim, read his memoir A Stone of Hope. And you can follow him on instagram @stgermain_

This article from History.com is a good overview of how Black veterans were denied the benefits of the GI Bill.

This is Elissa’s article about Conversation Culture that was discussed.

Here’s an overview from the NY Times of what happened with Amy Cooper and Christian Cooper in Central Park in May.

Resmaa Menakem’s book My Grandmother’s Hands is an incredible resource for understanding and healing racial trauma.

Have you taken the free Find Your Voice, Speak Your Truth mini-course yet? Learn the full Voice Body Connection Process so you can practice it for yourself. Sign up at https://www.voicebodyconnection.com/minicourse.

As a member of the Voice Body Connection Membership Community, you get access to:

Our Editor is Sean Brennan

Our Photographer and Graphic Designer is Laura Sills

Our Videographer is Miguel Garzón Martínez

And our theme song is “Waters of Body” by Strange Weather

Please note that Amazon links in the show notes are connected to the Voice Body Connection Associates account. All other partner links are acknowledged. Thank you for supporting the podcast!